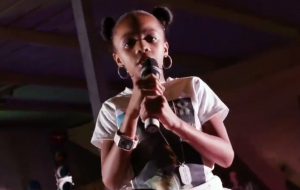 DMX’s daughter delivered a heartwarming performance during a tribute concert for her late father in Texas.

The Yonkers rapper was slated to perform at the club in May, but the bar’s owner joined forces with X’s family and put together a dedication show.

Sonovah Hillman Jr sang “Slippin” and “Ruff Ryders’ Anthem” while on stage at The Wildcatter Saloon on May 29.

The 8-year-old is seemingly walking in her father’s shadow. She spit a creative rhyme at his memorial at the Barclays Center.

Hillman wasn’t DMX’s only daughter who released a tribute.

His daughter Sasha posted a lengthy open letter days after her father passed away. “Nothing will ever explain how i feel, how this whole situation feels. my twin, i love you. we were the same person as a whole and i’m glad to have been blessed with being your daughter,” she said. She also shared a picture of the two of them holding hands on stage.

The post DMX’s 8-Year-Old Daughter Performs At His Texas Tribute Show appeared first on The Source.