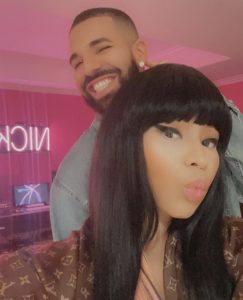 It’s a YMCMB reunion for Drake and Nicki Minaj.

Back in 2009, Lil Wayne formally introduced the world to two of the game’s biggest superstars of the past decade. The Young Money superstars would release their debut albums in 2010 and the rest was history.

Now 11 years after their debut projects, many accolades and even children later, Drake and Nicki Minaj are back are in the studio.

The two recently reunited with Lil Wayne on Nicki Mina’s “Seeing Green,” back in May where Nicki says Weezy and Drizzy helped her get back into her bag.

The Queen rapper re-released her classic mixtape, Beam Me Up Scotty to streaming services back in May as well.

While the world continues to await the arrival of Certified Lover Boy, we can all appreciate a new track from two YMCMB legends.

The post Drake & Nicki Minaj Link Up For Studio Session appeared first on The Source.