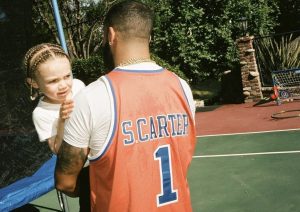 “Pool parties at the YOLO sure do look different these days,” Drake wrote on Instagram, highlighting a party for his son Adonis.

The pictures show Drake in a Roc-A-Fella S. Carter jersey putting on a full father role. The party appeared to have balloon animals and face paint, a proper way to celebrate Father’s Day.

On the business end, Drake reveals that his new Certified Lover Boy album will be out before the end of the summer.

When asked about the release date for the project during the Ultimate Rap League’s N.O.M.E. XI battle rap event, the Toronto emcee didn’t give an exact release date but confirmed that fans can expect it before the Summer ends.

Certified Lover Boy was scheduled to be released at the top of the year but Drake announced that he was taking time off to recover from an injury.

In the meantime, you can peep the backyard fun with Adonis below.

The post Drake Wears a JAY-Z Jersey While Hosting a Pool Party for His Son appeared first on The Source.