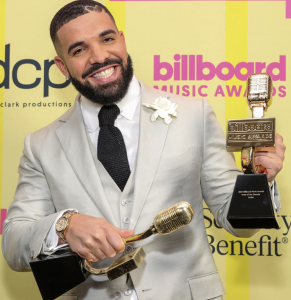 Earlier this month Drake was named Billboard’s top artist of the decade. So, it’s only fitting he won the Artist of the Decade Award at the 2021 Billboard Music Awards. A victory only obtained by Eminem, who won for the 2000s, and Mariah Carey, the champion for the 1990s.

Sunday, May 23 the rapper accepted the award with his son Adonis by his side.

“I’m really self-conscious about my music, and even if I do a good job I always wonder how I could’ve done it better. I rarely celebrate anything, and just for anyone watching this, and wondering how this happened. You know, that’s really the answer.” said Drake

According to Billboard, Drake holds the title for most BBMAs with 27 after taking home 12 prizes in 2019. The rapper first appeared on Billboard charts in 2009, and earned nine Billboard 200 No. 1s in the 2010s, first leading with his debut 2010 studio LP, Thank Me Later, and most recently reigning with 2019’s Care Package. He also earned six Hot 100 number 1s in that span.

The post Drake Wins Artist Of The Decade At BBMA’s appeared first on The Source.