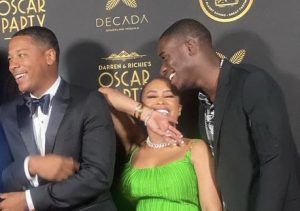 An innocent moment on the red carpet of the Academy Awards after-party has turned into a rumored relationship between Dreamdoll and Damson Idris. The two were seen in a photo standing next to each other all smiles before fans assumed that the two were potentially dating on the low.

Both the rapper and Snowfall actor took to their social media accounts to set the record straight. “Ok. So don’t pose near women because then we are apparently married,” Damson wrote on Twitter. “Forgive me, I’m still learning.”

Dreamdoll then wrote under The ShadeRoom’s photo clearing up the air as well. “Y’all need to relax ….. Potential boo? I literally just met him yesterday it was just a damn photo,” she stated.

Although the two have cleared the air and stated that the photo was innocent, fans can’t help but judge that from the photo, the two could have possibly made a good-looking couple. What do you think? Check out the images below.

The post DreamDoll and Damson Idris Sets the Record Straight on Dating Rumors appeared first on The Source.