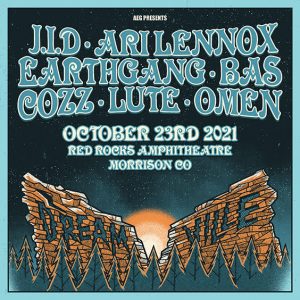 The Dreamville team is playing Red Rocks, one night only.

AEG Presents released a statement today that they are thrilled to announce “Dreamville on the Rocks”, a new one-night-only concert event featuring the Dreamville Records team at the iconic Red Rocks Amphitheatre in Denver on Saturday, October 23, 2021.

According to the press release, This concert will mark a special reunion for the whole Dreamville team including J.I.D, Ari Lennox, EarthGang, Bas, Cozz, Lute & Omen, many of whom will be performing in person to live audiences for the first time in over a year. This also will mark the first time all members of the Dreamville Records label roster will be performing together since the inaugural sold-out Dreamville Festival took place in Raleigh, NC in April 2019.

Founded by Grammy Award-winning and multi-platinum hip-hop artist J. Cole in 2007, the organization is home to Dreamville Records, a critically acclaimed and commercially successful record label distributed in partnership with Interscope Records. Dreamville Records is currently home to a variety of both established and up-and-coming music artists, including J.I.D, Ari Lennox, Bas, EarthGang, Cozz, Lute, and Omen.

Additionally, the company created the Dreamville Festival in J. Cole’s home state of North Carolina offering a highly curated experience with local culture, food, art, and performances from some of the biggest names in music today. With over 40,000 ticket buyers from across the globe regularly in attendance, Dreamville Festival quickly became one of the largest annual events in the state of North Carolina as well as one of today’s most popular artist-run music festivals.

Dreamville reunions are generally rare occurrences, will we see you there?