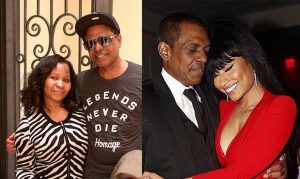 Just as her hiatus took place, reports surfaced that Nicki Minaj’s father, Robert Maraj was fatally struck in a hit and run in Long Island, New York. Charles Polevich, 70 years old, turned himself into law enforcement after being unidentified for several days. Polevich would then be released on a $250,000 bond.

In response to the fatal attack, Minaj’s mother, Carol Maraj, filed a $150 million lawsuit against Polevich for allegedly being responsible for the killing of Robert Maraj.

Attorneys Ben Crump and Paul Napoli released a statement regarding Carol Maraj’s lawsuit on Instagram. “Paul Napoli and I have filed a $150 million lawsuit in the hit-and-run death of Robert Maraj, @nickiminaj’s father.”

“He was fatally injured in a hit-and-run accident on February 12, 2021, when he was struck by a car being driven by Charles Polevich as Mr.Maraj walked along a Long Island road. After striking Maraj, Polevich left the accident scene and did not call for emergency services or render aid to Maraj,” he continued.

“He was not only irresponsible and negligent, but more concerned about running away and hiding than seeking help. Polevich’s behavior was criminal, cowardly, and immoral. We will hold him responsible for his reckless actions that led to Robert Maraj’s death!”

According to court documents, Polevich reportedly is denying any kind of wrongdoing that led to the fatal incident. Apparently, in an attempt to dismiss the lawsuit, Polevich’s attorney claims that Maraj was “reckless, careless and negligent in crossing the street,” he also adds that his client was forced to make a “sudden and unexpected circumstance, not of his own making” due to being in an unexpected emergency.

Our thoughts and prayers go out to the family and friends of Nicki Minaj’s father Robert Maraj.