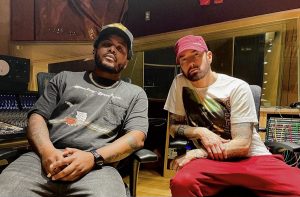 The Shady Records empire is expanding. Los Angeles rapper GRIP has reprotedly signed to the label.

HipHopDX caught the tweet that went out of GRIP hanging with Shady who posted the picture on his social media.

“It was one of those full circle moments because I grew up on Eminem so to have him reach out and let me know how dope my shit is was so cool,” GRIP said. “Excited to partner with Shady/Interscope and get the music out on a larger platform”