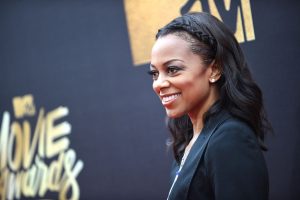 Entertainment Tonight is catching on to the changing times and making history with their recent announcement that they have tapped Nischelle Turner, as the first Black woman to anchor their industry-leading Hollywood media brand.

Turner is preceded by Mary Hart (1982-2011) and Nancy O’Dell (2011-2019), and is just the third woman in the history of the show to co-host. Turner has earned four Daytime Emmys and been a weekend host and correspondent for Entertainment Tonight since 2014.

In an exclusive interview with Variety, Turner who has been a journalist for more than 20 years, stated “It means everything to me. Make no mistake about it: I believe and have always believed that I was the best person for the job, but it was never lost on me that it was also bigger than just me. I would be representing an underserved group of people who are finally getting a moment in the spotlight — and a well-deserved moment.”

Turner stated, “I do feel like that’s rarefied air in television, especially news magazines to stand with those women. I’ve looked at their careers for my whole career; I’ve taken bits and pieces from their style.”

Another history-making moment will be co-hosting with Kevin Frazier, as the two anchors will be the first Black duos to host Entertainment Tonight in a full-time capacity together. Turner added, “If I’m being honest, there was always a thought in the back of my head, ‘Is the audience in America ready for two Black hosts up there together?’ and the answer that America gave us was ‘Yes.’”