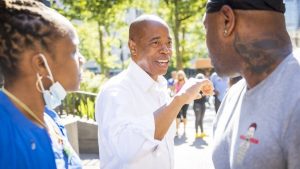 Eric Adams is officially the Democratic candidate for mayor of New York City. On Tuesday, Adams secured the candidacy.

If elected, Adams would become the second Black mayor of NYC. In the primary, he beat out one-time Democratic presidential hopeful Andrew Yang, Maya Wiley, who was endorsed by New York Democrat Rep. Alexandria Ocasio-Cortez, and Kathryn Garcia.

“We’re not going to recover as a city if we turn back time and see an increase in violence, particularly gun violence,” Adams said. During his campaign, he opposed the concept of defunding the police. Adams is a former police captain and borough president of Brooklyn.

“While there are still some very small amounts of votes to be counted, the results are clear: An historic, diverse, five-borough coalition led by working-class New Yorkers has led us to victory in the Democratic primary for mayor of New York City,” Adams said in a statement.

“Now we must focus on winning in November so that we can deliver on the promise of this great city for those who are struggling, who are underserved and who are committed to a safe, fair, affordable future for all New Yorkers,” he added.