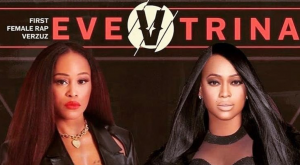 DJ Nasty opened the night with a touching tribute to Tupac, who would’ve celebrated his 50th birthday on the same day.

This was the first female rap battle and it was one for the books.

Trina serenaded a Miami crowd in person, meanwhile, Eve held it down all the way in Europe.

The Baddest B*tch came out the gate swinging with “Who’s Bad” and the pitbull in a skirt followed-up with “Tambourine.”

The Hip Hop legends played 20 hits from their respective catalogs but unlike previous Verzuz celebrations, they kept the origin stories to a minimum.

Some highlights include Eve performing the Ruff Ryders anthem and paying homage to DMX.

Additionally, Trick Daddy made a guest appearance to perform his smash hit “Nann” alongside Trina.

We kept a live scoreboard on Twitter and fans told us who they thought won each round.

The final round was a draw as both artists performed their verses on Ludacris’ “My Chick Bad.”

Whose verse did you like better? Eve or Trina’s? Check out what our followers thought:

The post Eve and Trina’s Verzuz Highlights and Score Card appeared first on The Source.