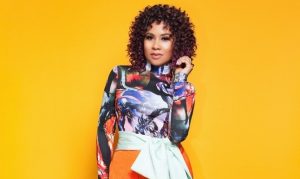 When celebrating Women’s History Month, we have to honor one of the most influential women in the music industry, Angela Yee. Yee joined the National Museum of African American Music’s Industry Relations Collective of the Board in 2020. Beyond her role in the development of the museum, Yee manages her businesses, including Juices For Life BK in Brooklyn alongside Styles P, hosts the Lip Service podcast, all while holding down her spot on the long-running radio show, The Breakfast Club, which grabbed her a spot in the Radio Hall of Fame.

It has been ten years since The Breakfast Club launched. As a part of numerous accolades, the show was named the number one radio program by The Source on the Power 30 Issue for five years in a row. The show is available in over 100 markets where you can hear Angela’s Rumor Report, her advice segment and how you can keep up with the current events.

Following the grand opening of the National Museum of African American Music’s historic galleries, The Source have caught up with the Brooklyn native and discussed how she will continue to ontribute to the museum, discussed some of her favorite pieces at the museum and more.

You joined the Music Industry Relations Collective Board in 2020, what did you want to contribute to the museum when being on board?

The museum is super important because this is the business we are in. African- American music has influenced every genre of music. It is definitely important to have our own museum complimenting our history. I feel like artists today need to know their history by going back and seeing who was influenced by who and how strong our music was to rock and roll to gospel to jazz to blues and r&b. It is important about our influence and who we have in music today in every genre.

What does music mean to you?

In the museum what were some of your favorites that you would go back and want to learn more about?

I know that they were gathering different items from people from instruments to costumes. I know there is an interactive component that I can’t wait to see in person. With the concept and the people, who are in contact with those things in one place, are going to be phenomenal and life-changing for people. There are times where this museum will be life-changing.

When gaining the relationships and building that connection with others through your internships, what was the advice that you had received that was most influential to you that stuck by you?

I was interning with this guy, who was an attorney, but I remember him telling me the only reason why he went to law school and got his law degree, was because he wanted to work in the music business and felt like it was the only way to get in. One thing I learned is to get your foot in the door and navigate from there. Even though it is not the department you want to be in or in the building, then that is how you can move around. What I have learned is when working with him, I was still going to departments I was interested in, and people really appreciated that but it is important to network. We put ourselves in a box with people who we are working with. It is really important to expand and grow your network because you never know what that opportunity might come from. Treat everyone really well no matter if they work at the mailroom or as a CEO.

What is something that you wish you would have known when going into the industry?

I wish I was more financially savvy because I could’ve made smarter decisions when I did have little money. I wish I would have started investing earlier because everything would be worth more now by making smarter decisions back then when I was younger.

It has been over a decade since The Breakfast Club has launched with you, Charlamagne Tha God, and DJ Envy. When starting this show, and being the only woman to co-host the show, what was your goal?

When we first started, we just wanted to make sure we didn’t get canceled because it was a difficult but yet competitive market to be in, in New York City. It is a blessing just to be able to survive the first couple of years from it. The things I didn’t know were going to happen were by being on Revolt TV every day or just how powerful YouTube would be to us and those videos. Also by making sure, we had a good time and entertained people and to be positive.

With it being Women’s History Month, and you are one of the most influential women in the music industry, who has created several businesses for yourself, what is some advice for women, who are inspired to be like you?

Supporting other women. Sometimes, we want support but we don’t support other people. It is important to do those things even when it’s not financial. If it’s you posting something for somebody or even just reaching out to them or even they did a great job by retweeting something, those things do mean a lot to people when we out here trying to grind and make it. Support your friends’ business by buying something that they are selling and show support that way because it does go a long way and people are going to reciprocate and remember that. We are standing with the people, who are with us, and to lift each other all the time by expressing gratitude and being sure to lift each other up. It might be your turn when something is happening for you but your girls have something else happening. If you see someone who is doing dope things, congratulate them and tell them.