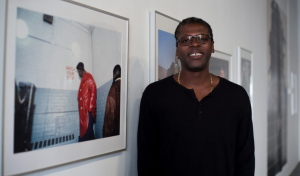 The Hip Hop community has taken a huge loss after it has been confirmed that famous photog Chi Modu passed away. He was 54 years old.

Modu’s death was announced on his social media pages Saturday(May 22) which stated, “Our hearts are broken… We continue the fight ©

Modu, a Nigerian-born New Jersey native, graduated from Rutgers University before pursuing photojournalism at the International Center of Photography in New York. His passion followed him to the Big Apple, where he worked for the Harlem-baaed Amsterdam News before landing his position as Director of Photography at The Source Magazine.

Some of Hip Hop’s most prolific images of the 90s were taken by Modu, from Mobb Deep’s The Infamous album cover to the Notorious B.I.G. in from of the World Trade Center to Tupac Shakur’s iconic black and white bandanna flicks.

The Source co-founder Jon Shecter sent a heartfelt tribute to Modu on social media, tweeting, ”Rest peacefully Chi, your warm heart and your artistic gifts will thrive in this sphere forever. Love you brother.”

The post Famed Former Source Photographer Chi Modu Passes Away At 54 appeared first on The Source.