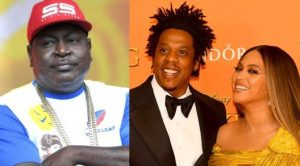 Trick Daddy immediately began trending when remarks he made about Beyonce and JAY-Z made its round on the Internet.

Trick said Beyonce couldn’t sing in a now-viral Clubhouse audio clip. “Beyoncé ain’t trying to give back to music or nothing. Beyoncé don’t write music and barely can sing her m############ self. Beyoncé can’t sing!”

He added, “Beyoncé is to R&B, what Jay-Z is to New York. That’s why they together. Jay-Z ain’t never won the greatest rapper alive. [Who] put him on a level like that? New York lost [The Notorious B.I.G.] and needed a hero. They wanted to be the Mecca of Hip Hop and they just handed it over to Jay-Z.”

Trick Daddy went on to claim that Hov “bought” one of his biggest hits, “Big Pimpin’” featuring UGK after it “got big.”

The Beyhive swarmed the Miami rapper’s comments with bumble bees and he went on 99 Jamz to double down on his claims. “That’s my unpopular opinion,” he said on the radio show.

“People say Beyoncé can’t sing for attention that’s it, and a quick google search will tell you about her pen so I’m not even gonna get into my stan bag on lil miss trick daddy,” one user tweeted in response to Trick Daddy’s comments about Beyonce.

Even some celebrities came to the Queen Bey’s defense, including Trick’s frequent collaborator and friend, Trina.

“ALL day, Everyday… The Queen,” the femcee wrote along with a video of one of Beyonce’s legendary performances.

What are your thoughts on Trick’s “unpopular opinion?”