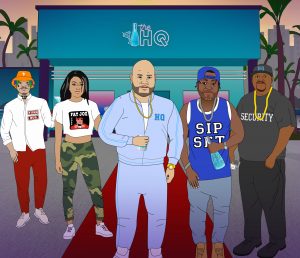 Fat Joe and Jim Jones are set to unite for The HQ, a “Sipcom” animated series that is created in association with Hpnotiq.

In the series Hpnotiq opens a nightclub titled The HQ and becomes the go-to spot for ip-hop’s hottest rappers to hang out, discuss the rap game and catch a drink.

“Hpnotiq has been a part of hip-hop culture since the early 2000s – from the bars, clubs and nightlife to music videos the famous blue hue bottles were synonymous with a good time” said Fat Joe, Creative Director at Hpnotiq. “So with many bars and restaurants closed during the past year, we decided to launch a virtual nightclub in The HQ which is hip-hop’s first animated ‘sipcom’ series. I teamed up with my fellow NYC rap icon Jim Jones to discuss the rap game, classic hip-hop moments and even recipes on how-to make the brand’s signature cocktails so we can bring the Hpnotiq Experience directly to your home.”

The new animated series combines modern TV classics like Cheers with animation like The Boondocks for hip-hop’s new hit show. Each episode of the 10part series will feature both Joe and Jones spanning topics like Old heads vs. New Jacks, How to Flex as a Sneakerhead, and reliving classic moments in hip-hop history.

The post Fat Joe and Jim Jones to Run Virtual Nightclub in New Animated Series appeared first on The Source.