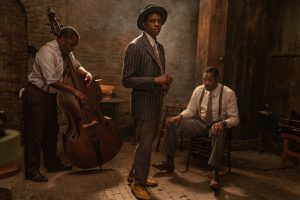 Mia Neal and Jamika Wilson made on Oscar night.  The two Hollywood makeup and hairstylists became the first Black women to win the Oscar for makeup and hairstyling for their amazing work in Ma Rainey’s Black Bottom, along with Sergio Lopez-Rivera.  Neal ran the hair department and Wilson is Viola Davis’ personal stylist. They also made history as the first Black women to be nominated in the category.  Great win for these ladies and for the culture!

“I was raised by my grandfather James Holland,” said Neal in her speech, as reported in Variety.  “He was an original Tuskegee Airmen, he represented the US in the first Pan Am games, he went to Argentina he met Evita, he graduated from Northwestern University at a time that they did not allow Blacks to stay on campus, so he stayed at the YMCA. And after all of his accomplishments, he went back to his hometown in hopes of becoming a teacher. But they did not hire Blacks in the school system. So I wanted to say thank you to our ancestors who put the work in, were denied, but never gave up.”

Neal went on to say, “And I also stand here as Jamika and I break this glass ceiling with so much excitement for the future. Because I can picture Black trans women standing up here, and Asian sisters, and our Latina sisters, and Indigenous women. And I know that one day it won’t be unusual or groundbreaking it will just be normal.”