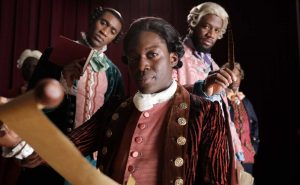 This timely take on the popular Comedy Central series will follow a familiar format to the original where “ iconic stories in history are told by an inebriated narrator, while actors reenact the narrator’s tale and lip-sync their dialogue.” So if you haven’t seen Drunk History, the narrator will have had a few and the actors reenacting the story will look drunk too, while they educate viewers on history. Cheers to that!

The series order is set for six-episodes, spotlighting iconic Black people and their globally recognizing cultural contributions with comedy as the medium. Expect new episodes released every Thursday

Kerry Taylor, EVP, Youth and Entertainment Brands, ViacomCBS international said, “This series combines the power of the Comedy Central brand and outstanding talent to put front and center decentered Black voices and their influence on global history, all through a comedic lens. Taylor continues, “Black creatives, crew members and talent brought this show to life so we can celebrate the incredible contributions of Black figures from across the African diaspora.”

Rapman added “My entire career has been focused on telling authentic, Black stories … I’m excited to be a part of a show created by Black people where viewers can be entertained while learning about these unsung Black heroes.”

Here’s a first look at the first episode below: