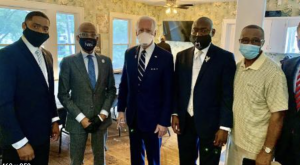 President Joe Biden plans to meet with George Floyd’s family on the first anniversary of his death by Minneapolis Police. In addition to meeting the President, Floyd’s family will meet the lead negotiators for George Floyd Justice in Policing Act bill in the Senate.

Ahead of the meeting, the 46th President reflected on the past year.

“It’s been one year since George Floyd was murdered. In that time, George’s family has shown extraordinary courage. Last month’s conviction was a step towards justice – but we cannot stop there. We face an inflection point. We have to act.w” Tweeted President Biden.

The goal of this policing act is to set up a national registry of police misconduct, ban racial and religious profiling by law enforcement and overhaul qualified immunity for police officers. Originally the President planned to have the legislation passed by Tuesday, but it remains at the Senate while negotiations continue in Congress.

Earlier today, the family met with House Speaker Nancy Pelosi and Congresswoman Karen Bass. The Democratic congresswoman led the charge to pass the police reform bill in the House of Representatives.

The post Floyd Family To Meet With President Joe Biden appeared first on The Source.