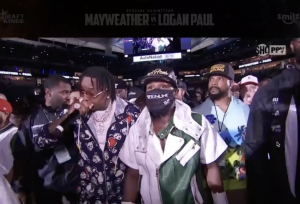 If you watched the Mayweather-Paul fight, you may have noticed the leather OnlyFans snapback that was debuted by Money Mayweather. The new had is created by Mayweather, who is now an OnlyFans creator.

The Fight Night Snapback Hat is made from vegan-friendly faux leather and features the OnlyFans logo in metallic gold embroidery. The hat is available in limited quantities and retails for $30. It’s expected to ship in mid-June.

As for the fight, if you expected Floyd Mayweather to knock out Logan Paul in his exhibition match on Sunday night, sorry to you. The two linked up in Hard Rock Stadium after much fan-fare and surprisingly, Paul and Mayweather went the full eight rounds.

“He’s better than I thought he was,” Mayweather said. “I was surprised by him tonight. Good work. Good little guy.”

You can see the Snapback below.