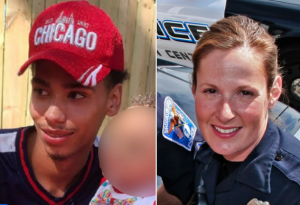 According to a report from The New York Times, the officer who fired the fatal shots that killed 20-year-old Daunte Wright will be charged with manslaughter by the Bureau of Criminal Apprehension in Minnesota.

The day after 26-year veteran Kim Potter and the Brooklyn Center Police Chief resigned from their positions, Potter was arrested, formally charged, and placed in the Hennepin County Jail on charges of manslaughter after shooting and killing Wright during a traffic stop on April 11.

“While we appreciate that the district attorney is pursuing justice for Daunte, no conviction can give the Wright family their loved one back,” said famed civil rights attorney Benjamin Crump. “This was no accident. This was an intentional, deliberate, and unlawful use of force.”

Potter, 48, was actually training other officers the night that she shot the 20-year-old father, who’d just contacted his mother by phone to tell her that he’d been pulled over by police. That conversation would be the last one Wright’s mother had with her son.

Officers attempted to arrest Wright on an outstanding warrant but managed to break free from the officers’ grip and attempted to flee in his vehicle. Potter shouted “Taser”, but fired a single round to Wright’s chest, killing him.

Potter faces up to ten years behind bars if convicted for manslaughter in Wright’s death.

The post Former Officer Kim Potter Will Be Charged With Manslaughter In Daunte Wright’s Death appeared first on The Source.