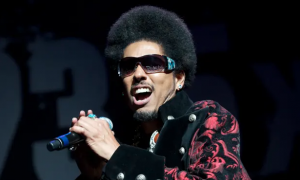 According to a report from TMZ, the funeral arrangements for Hip Hop legend Gregory “Shock G” Jacobs are scheduled for this Saturday in Tampa, Florida, with members of the iconic group Digital Underground planning to attend.

The news came from Shock’s manager, Atron Gregory, about the funeral plans, while Money B of DU is helping the family prepare for the services. it has also been announced that Tupac’s brother, Mopreme Shakur, will also be in attendance.

Shock G was found dead in a hotel room not far from where his funeral will be held. He was 57 years old.

His cause of death is still undetermined, but it has been revealed that the hotel manager was the last one to see Shock alive outside of the building the day before he died. When Shock missed his check-out time the next day, the manager became concerned and went to the rapper’s room. The manager found Shock unresponsive and called 911.