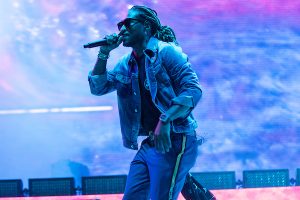 Future quickly became a trending topic recently. In addition to his music, the Atlanta rapper is renowned for creating a number of memeable moments throughout the years on social media. His latest social moment is more serious than in the past.

On Tuesday, March 16, a video begin to surface where the “Life is Good” rapper watched a security guard chocked slam a woman on the ground. In the clip, both the security and women share aggression, but the security is obviously bigger than the woman. He grabs her by her throat and throws her to the ground. When she gets up, she attacks the security, only to be thrown down once more. The video then pans to Future who is standing amongst the crowd with an unbothered look.

There is no telling what was going through Future’s head at that particular time. Apparently, the young woman only wanted to get Future’s attention. Some say the security was just doing his job, but the aggression was a bit excessive. Future has yet to comment on what went down.

The post Future Witnesses Female Fan Getting Choke-Slammed By Security appeared first on The Source.