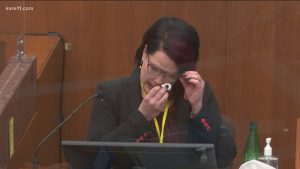 Thursday morning, Courteney Ross, girlfriend of George Floyd, took the stand during Derek Chauvin’s murder trial and detailed moments of their relationship including their first date and final phone calls.

Ross revealed they met as Floyd was working security at the Salvation Army’s Harbor Light Center where she was visiting her son’s father. Ross is a mother of two. She stated during the visit Floyd offered to pray with her and she broke down when a picture of Floyd was shown by Attorney General Matthew Frank.

The Daily Mail details Ross referred to Floyd as “a mama’s boy” who was gravely impacted by the death of his mother in 2018. Ross would also highlight that they both struggled with drug abuse, addicted to opioids that were prescribed to them for chronic pain.

“Both Floyd and I, our story — it’s a classic story of how many people get addicted to opioids. We both suffered from chronic pain. Mine was in my neck and his was in his back,” Ross said. “We both have prescriptions. But after prescriptions that were filled, and we got addicted, and tried really hard to break that addiction many times.”

Her personal and emotional testimony came after bodycam footage was viewed for hours on Wednesday, The USA Today reports. In the videos, Chauvin would defend his actions to a bystander, Charles McMillian, who broke down as he recalled the moments of Floyd’s death. McMillian confronted Chauvin as Floyd was carried away in an ambulance.

“That’s one person’s opinion,” Chauvin said to McMillian in the confrontation. “We gotta control this guy ’cause he’s a sizable guy … and it looks like he’s probably on something.”

Live stream of the Derek Chauvin Trial can be seen here.