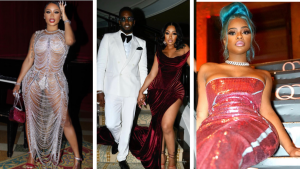 High drama and decadence was the theme of the night at Control Music CEO Pierre Thomas’ 40th birthday bash. Diddy flew in to host the star studded event right after his memorial day cookout .  Atlanta Showed up and showed out in glamorous gowns and top notch designer tuxedos. Take a look at some of the looks we loved from this legendary night.

Diddy who stop for a pic with Yung Miami is wearing an all-white Saint Laurent Suint.  While Yung Miami was a stunner in a Burgundy Corset dress by Lena Berisha Official;  Strappy sandals by Rene Caovilla  and hair that was smoothed at the top with romantic waves at the ends.

“Me and my wife had a ball last night” Is what Gucci, posted on his social media.  Keyshia Ka’oir was the belle of the ball in a Tony Ward Couture with a sleek and shiny side bun and dramatic lashes . Gucci Mane complimented the look in a classic black tuxedo.

It’s all in the details-Here is a shot of Gucci in Gucci.

Sequin Dress by Rick Owens paired with a Judith Lieber Unicorn Clutch. The contrasting  blue hair is what gives the look its edge.

Vintage Couture dress paired with a Tom Ford Pink “Pussy Power” bag. Her hair, created by The Pony Wizard is pulled back into a classic low ponytail  with a deep wave long piece attached rhinestones finished the look.

Embellished romper and green wrap around drapery by Charbel Zoe and Elite Pour La Vie, “Watermelon Slice” bag by Judith Leiber.  Hair was pulled into a high ponytail,  with baby hairs and pieces hanging on either side to soften the look.  Curly extension pieces are added for drama and to finish the look.