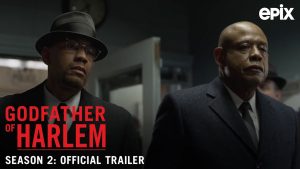 So looks like Epix has dropped a hot new, full trailer for the hit show, Godfather of Harlem season 2 with Forest Whitaker returning as the leading man, in the starring role as Bumpy Johnson.

From Epix: Godfather of Harlem Season 2 finds Bumpy Johnson battling the New York Crime Families for control of the lucrative and murderous “French Connection,” the pipeline for heroin that runs from Marseilles to New York Harbor. With a distribution syndicate that includes black crime bosses from other major U.S. cities, Bumpy takes a cue from his friend Malcolm X’s message of black economic nationalism. His ambitious plan will face challenges from not only the Italians but his wife Mayme, daughter Elise, rival Adam Clayton Powell, prosecutor Robert Morgenthau, and even Malcolm himself. Once again, Godfather of Harlem explores the collision of the criminal underworld and civil rights in the colorful, tumultuous year of 1964.

In addition to those big names, Epix also announced an array of recurring stars, who will complement the aforementioned new recurring cast member Grace Porter as the one and only, Betty Shabazz.

The Hangover alumni Justin Bartha, will play Robert Morgenthau, “the patrician, unflinching and incorruptible US District Attorney for the Southern District of NY. A deeply moral man, and absolute killer in the courtroom. He hopes to use Bumpy as an ally in his pursuit of taking down organized crime in NY. From a long line of public servants who are committed to seeing justice done.”

Annabella Sciorra plays Fay Bonanno,”the wife of mob boss Joe Bonanno who, unlike most mafia wives, is deeply entrenched in her husband’s business. While she has a traditional reliance on catholic ritual, she’s as cold blooded as they come.”

Ronald Guttman will be Jean Jehan. “A native Frenchman, Jean is ruthless, intelligent, cultured and extremely dapper. Responsible for the import of heroin between Marseille and the United States known as ‘The French Connection’ – the main supplier of heroin to the Italian mob.”

Gino Cafarelli comes in as Fat Gino, one of Chin’s henchmen. “A mobster leading the fruitless hunt for Bumpy Johnson. He is a die-hard believer in the supremacy of the Mafia and its rules and regulations.”

Isaach De Bankolé will take on an older character Monsieur 98, who is described as “an African Frenchman, Monsieur 98 is a chemist known for producing extremely pure heroin. A man of few words, he is partnered with dope kingpin Jean Jehan to smuggle vast quantities of heroin into the United States.”

Hip Hop icon Method Man, who also stars on Power Book II, will play Sam Christian, the head of the Philadelphia Black Mafia, and a longtime friend of Bumpy Johnson’s. ” A stylish man about town, Sam will be a vital part of Bumpy’s Ten Harlems heroine distribution network.”

Michael Rispoli takes on Joseph Magliocco, who newly ascends to the head of the Profaci crime family with the help of his friend Vincent Gigante, the jovial Magliocco will face immediate tests of his loyalty among the battling factions of the New York Mafia.”

And last but not least Neal Matarazzo is playing Captain Mills, “symbolic of police culture at the time, Mills is an unrepentant racist but also a pragmatist who puts “green” over black and white.”