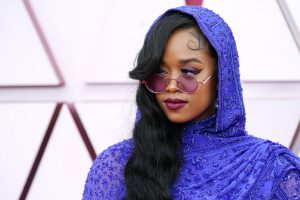 Add Oscar-winner to H.E.R.’s resume. The R&B star performed her song “Fight For You” from the Judas and the Black Messiah soundtrack and then would go on to win the award for Best Original Song.

We were listening to Marvin Gaye, Curtis Mayfield, we listened to a lot of Sly and the Family Stone, some of my favorites,” H.E.R. told The Hollywood Reporter about the song. “I picked up the bass thinking about this theme of fighting for something. Because there’s so many things that Fred Hampton was fighting for and that we are all still fighting for.”

You can see the performance and the acceptance speech below.

The post H.E.R. Performs ‘Fight For You’ and Wins Best Original Song at the Oscars appeared first on The Source.