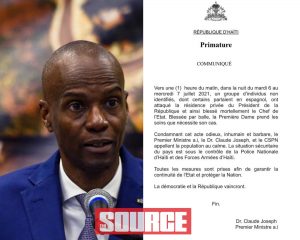 The 53-year-old president’s wife, Martine Moïse was also shot but survived and is being hospitalized.

The assassination occurred amid a rising wave of politically linked violence in the impoverished Caribbean nation. Haiti still has not recovered from the devastating 2010 earthquake and Hurricane Matthew that struck in 2016.

Moïse was a former banana exporter who spent the last year in a political fight with the opposition over the terms of his presidency.

He claimed his five-year term should end next year while the opposition says he should have left office in February.

People in Haiti are in shock today after the news of the assassination of country’s President and attempt on the First Lady. The Prime Minister is asking for calm and plans to address the nation soon.

With Haiti politically divided, and facing a growing humanitarian crisis and shortages of food, there are fears of widespread disorder.