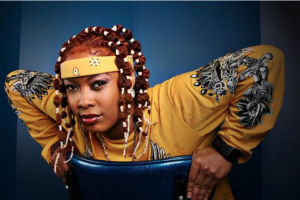 Da Brat aka Shawntae Harris was born in Joliet, Illinois on this day 46 years ago. The Grammy-nominated rapper/actress/radio host that is mostly known for her debut album Funkdified, is the first female solo artist to earn a platinum plaque and the second overall only to Hip Hop icons Salt ‘N Pepa.

Da Brat was raised on Chicago’s West Side, living between parents with an older, beautiful half-sister by the name of Lisa Raye. The So So Def-based artist has recorded hits with rap icons such as Notorious B.I.G., Tyrese, Destiny’s Child, Lil’ Kim, Missy Elliot, Mariah Carey, and the late Lisa “Left-Eye” Lopes.

In 2020, Da Brat is now an internationally known radio host on the Atlanta-based, Rickey Smiley-produced show Dish Nation. She also announced just a couple of weeks ago that she is indeed hitched to hair care queen Jessica Dupart.

Happy Birthday to Da Brat on her special day and many more to come in the future!

The post Happy 47th Birthday To Da Brat! appeared first on The Source.