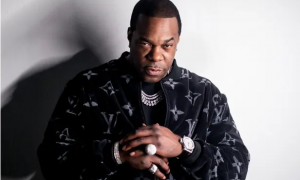 On this day in Hip-Hop History, we celebrate the birth of one of the most flamboyant and ostentatious personalities in Hip Hop. Today in 1972, the legend Busta Rhymes was born in Brooklyn, New York.

The 11-Time Grammy nominee and Flipmode Squad frontman has served as an unsung hero for the culture. This is not to say that he has at all gone unnoticed (“11 time Grammy Nominee” speaks for itself), but his influence on Hip Hop since it’s earliest stages of commercial success and role in the foundation of the New York Hip Hop scene is ever-present if you pay attention.

It can be said that Busta Bust’s career began with his involvement with Leaders of the New School. Alongside Charlie Brown, Dinco D, and Cut Monitor Milo, but Busta got his break opening up for Public Enemy in the late 80s. It was actually Chuck D himself who gave Busta Rhymes his stage name, after NFL receiver George “Buster” Rhymes. With Leaders of the New School, Rhymes released two albums: A Future Without a Past… and T.I.M.E.

While a part of the group, Busta’s unique style made it possible for him to be featured on major tracks with artists such as: Big Daddy Kane, The Notorious B.I.G., TLC, A Tribe Called Quest, and KRS-One. He also made his first appearances on screen in films such as Higher Learning and Strapped prior to ever releasing any solo music.

In 1995, Busta Rhymes released his debut solo LP The Coming which is hailed as a masterpiece of Hip Hop featuring his smash hit single “Woo Hah!“, his first solo single. The commercial successes of this album allowed Busta Rhymes to finally get the respect he deserved (and for the most part already had in the artist community) as a solo artists. Busta’s follow up albums When Disaster Strikes and Extinction Level Event (Final World Front) were just as if not more successful than the first.

Through the 2000s, Busta continued to be a powerhouse. With the release of his greatest hits album Total Devastation: The Best of Busta Rhymes and new original album Genesis Busta was once again among the top of the charts with this smash hit “Pass the Courvoisier Part II” feat Pharrell and P. Diddy. Throughout the early 2000s Busta’s music could be heard in clubs across the globe and his influence of the culture could be seen, heard, and felt.

His seventh studio album The Big Bang was exactly what the title describes being that it was his first #1 album on the Billboard 200 chart. Selling 209,000 copies in the first week alone, this LP showed that time was not a factor when it came to Busta’s popularity and appeal and that his high energy style could remain on top regardless of how the game changed around it. This album spawned what is probably Busta Rhymes most famous song, “Touch It” who’s remixes sky rocketed Bust to the top of every radio chart as far as airplay was concerned.

In the 2010s however, Busta has yet to reach the same level of success as he did in the 80s, 90s, and 2000s but has been able to remain on tour and is still leaving his mark on the industry. In 2012, he was part of the Grammy-nominated single “Look At Now” which was a summertime hit, again proving that no matter the decade, Busta Rhymes can still turn the party up.

From everyone here at the Source Magazine, happy born day Busta. Thank you so much for what you have done for Hip Hop and may you see many more golden years of success.

The post Happy 49th Birthday to “The Dragon” Busta Rhymes! appeared first on The Source.