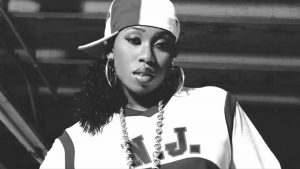 Rapper/producer/songwriter Missy Elliott is a legend in the game due to her left of center ideas. She’s never been deterred by people saying her musical inclination as are too weird for the general public. Missy has made long lasting career on taking risks and those gambles have paid off in unimaginable ways.

So for Missy’s 50th birthday, which is July 1st, check out four ways she changed the game.

1. Music Videos
There isn’t an artist in any genre whose debut music video had as much impact as Missy’s “The Rain.” As addicting as the song was, everybody always talked about the heavyset woman with finger waves dancing in a trash bag. The Virginia native was never afraid to throw a million and one out of the box ideas at you in one video. Over the course of her career, Elliott has gone bald, spit in a man’s mouth, hang from a chandelier and eaten a Lamborghini all in the name of music video artistry.

One of her most conceptual visuals, “Get Your Freak On”

2. Lyrics
Before Missy came to prominence, female rappers were either demanding respect or trying their damnedest to focus male attention on their sexuality. The rapper/producer shunned those notions and became a star simply by making a noise on the Gina Thompson “The Things You Do” remix. Her lyrics prove she’s as skilled as, if not better than, any man to touch a mic because as she’s said before, she keeps it realer than the titties on her chest. That’s definitely a rarity in today’s music.

Check out the lyrics to one of her most recent “single to remix” smash hits, “Work It”

3. Image
The Grammy Award winner has kept her individuality in tact by remaining true to self. Instead of trying make herself seem skinnier than she was, Missy used her size as a foundation to build a larger than life character in Hip Hop. You wouldn’t catch her in heels and a dress, but you always knew Missy was probably the most confident when she walked into a room.

4. Production With Timbaland
The work produced by Missy and Timbaland was groundbreaking because it made us think about and listen to music differently. They incorporated obscure sounds into their songwriting to create a spaced out Hip Hop/R&B sound that still sounds like it came from the future. What would our 90s playlists be without “One In A Million”, “All In My Grill” or the star studded “Hot Boyz (Remix)”? Somewhere hoping an artist like Missy Elliott exists.