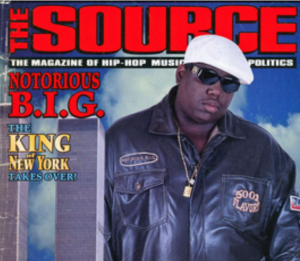 Today, “the greatest rapper of all time” was born; Brooklyn’s own Christopher Wallace, better known as the Notorious B.I.G. Smalls had the game on lock before an unknown suspect gunned him down on March 9, 1997. His music, however, lives on.

From his debut single, “Juicy,” to charted success through his collaborations with protégé group, Junior Mafia to the infamous East Coast/West Coast beef, and his individual feud with West Coast rapper, Tupac, Smalls’ triumph is legendary and continues to resonate with fans.

The rap slayer had numerous hits in his catalog and even more memorable lines. There were several times, however, Smalls was ruthless and aggressive, although as fans we may have been unaware if there was an underlying issue or a diss record target, but we definitely rapped along with his merciless storytelling lyrics. In honor of the Notorious’ 46th birthday, here are 10 most cutthroat Biggie Smalls lyrics.

“Relax and take notes, while I take tokes of the marijuana smoke. Throw you in a choke – gun smoke, gun smoke. Biggie Smalls for mayor, the rap slayer, the hooker layer – motherf*cker say your prayers. Hail Mary full of grace; smack the b*tch in the face, take her Gucci bag and the North Face off her back. Jab her if she act funny with the money, oh you got me mistaken honey.”

“Sticks and stones break bones, but the gat’ll kill you quick, especially when I’m drunk off the liquor.”

“Now I’m thirteen, smokin’ blunts, makin’ cream, on the drug scene, f*ck a football team. Riskin’ ruptured spleens by the age of sixteen. Hhearing ‘ the coach scream at my lifetime dream, I mean I wanna blow up, stack my dough up. So school I didn’t show up, it f*cked my flow up.”

“So, Jesus, get off the Notorious penis, before I squeeze and bust. If the beef between us, we can settle it with the chrome and metal sh*t. I make it hot, like a kettle get, you’re delicate, you better get, who sent ya?”

“But all we wanna know is “Where the party at?” And can i bring my gat? If not, I hope I don’t get shot. But I throw my vest on my chest ’cause n*ggas is a mess. It don’t take nothin’ but frontin’ for me to start somethin’.”

“Number nine, shoulda been number one to me: if you ain’t getting bagged stay the f*ck from the police. If n*ggas think you snitchin they aint tryna listen. They be sitting in your kitchen, waiting to start hitting.”

“When I die, f*ck it I wanna go to hell. Cause I’m a piece of sh*t, it ain’t hard to f*ckin’ tell. It don’t make sense, goin’ to heaven wit the goodie-goodies. Dressed in white, I like black timbs and black hoodies. God will probably have me on some real strict shit. No sleepin’ all day, no gettin my d*ck licked.”

“Armed and dangerous, ain’t too many can bang with us. Straight up weed, no angel dust, label us Notorious. Thug ass n*ggas that love to bust, it’s strange to us. Y’all n*ggas be scramblin, gambling. Up in restaurants with mandolins, and violins. We just sittin here tryin to win, tryin not to sin. High off weed and lots of gin. So much smoke need oxygen, steadily counting them Benjamins.”

“Who shot ya? Separate the weak from the obsolete. Hard to creep them Brooklyn streets. It’s on, n*gga, f*ck all that bickering beef. I can hear sweat trickling down your cheek. Your heartbeat sound like Sasquatch feet. Thundering, shaking the concrete….

“I got 7 Mac-11’s. About eight 38s. Nine 9s. 10 Mac Tens. The shit never ends. You can’t touch my riches. Even if you had MC Hammer and them 357 b*tches…..Oh my God I’m dropping shit like a pigeon. I hope your listening. Smacking babies at their christening.”

The post Happy Birthday To The One And Only Notorious B.I.G.! (R.I.P.) 10 Memorable Biggie Verses appeared first on The Source.