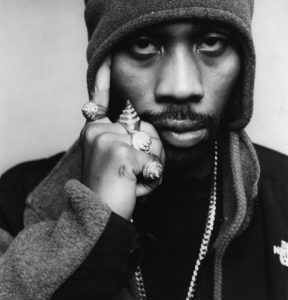 On this day in Hip Hop history, one of the culture’s most influential musical masterminds was born. Wu-Tang Clan frontman Robert Fitzgerald Diggs a.k.a. RZA was born today (July 5) in Brooklyn, New York, 49 years ago. Since stepping on the scene in 1989, RZA has done more than just create an outrageously successful career for himself and his affiliates but has also forever shaped and changed the way a lot of things are handled in the music industry. From branding to merchandising to mastery of one’s craft, RZA stands as a pillar example of how someone given nothing but their own mind can rise to be a titan in the entertainment industry.

In honor of his birthday, we’ve compiled a list of five of RZA’s most important power moves that helped to build and strengthen his empire. Spanning from music to video games, RZA’s influence can be felt across culture, color lines and international borders.

RZA signed with the famous Tommy Boy Records in 1991 under the moniker Prince Rakeem and released one EP, Ooh I Love You Rakeem. Although this may not have been the most eventful or productive period of RZA’s career, his tumultuous relationship with Tommy Boy is what helped RZA to formulate his own plan to monopolize Hip Hop. His time at Tommy Boy allowed him to build vital connections with artists and executives that can been seen lasting throughout the remainder of his career. Tommy Boy gave RZA a necessary first glimpse of how the music industry works as a whole, which helped him to finesse it into something that worked for him.

In his autobiography The Tao of Wu, RZA detailed a majority of the events surrounding the ridiculous success of Wu-Tang Clan, the most prominent of these being his “Five Year Plan.” This plan, enacted in 1992 following the success of the RZA-produced Enter the Wu-Tang: 36 Chambers, was RZA’s scheme for his group to become the most powerful figures in Hip Hop as a whole and individually. In an analogy, RZA explains, “I want all of y’all [Wu-Tang] to get on this bus. And be passengers. And I’m the driver. And nobody can ask me where we going. I’m taking us to No. 1. Give me five years, and I promise that I’ll get us there.”

At the end of the five year period, Wu-Tang Clan had released the Grammy Award-winning, number one Wu-Tang Forever LP (which sold four million copies in its first six months on shelves), GZA, Method Man, Raekwon, ODB and Ghostface Killah all had Top 10 albums on the Billboard 200 chart, and Wu-Tang Clan had a successful comic book, clothing line and video game under their belt.

As Wu-Tang’s popularity continued to grow exponentially, major labels were breaking down the door to get a piece of the action. For a short while there was a question of where the group and its members would sign. In an attempt to divide and conquer the corporate music world, RZA came up with the idea to have the majority of the members sign with competing record labels. Although from the outside this plan may seem risky and convoluted, RZA was again right on the money with this decision. Having Method Man sign with Def Jam, Raekwon sign with Loud, Ghostface Killah sign with Sony, ODB sign with Elektra and GZA sign with Geffen/MCA allowed for maximum promotion of each artist. No one company had to divvy out the funds to try and support the promo of each of these rap icon’s solo work. This also allowed record labels to work together like never before when pushing Wu-Tang Clan (who remained under Razor Sharp Records) albums because of the number of companies involved with its production. Never before or since has there been a group to sign a deal of this nature.

In 1995 Wu-Tang released their clothing line Wu Wear, which quickly became one of Hip Hop’s most coveted streetwear brands. The brand’s importance, however, doesn’t come from its popularity but its pioneering. With Wu Wear, Wu-Tang became the first rap group to be laced from head to toe in their own gear. This again gave the group another step ahead of their competition. Even today, Wu Wear is international worn and recognized as a prominent Hip Hop streetwear brand and can be found in stores across the globe and online on various outlets.

RZA’s most recent and ambitious endeavor to date is his dabbling in acting and filmmaking. As an actor, RZA has appeared in 21 films and has written and directed three. His popular The Man With The Iron Fists Kung-Fu series has proven he can successfully take his love for traditional Asian martial arts films and put his own spin on them to create something of his own. His partnership with famed director Quentin Tarantino only further validates his abilities and potential as a filmmaker and opens the door to the possibility of future projects.

RZA has yet to stop shaping Hip Hop’s culture and sound over the years, although he may not be as visibly active as he once was. His prominence in this culture is known and felt by anyone with knowledge of Hip Hop, its origins and its success as a genre. From everyone here at The Source, happy born day RZA, thank you for building such a godly culture.

The post Happy Birthday To The Wu Tang Clan’s RZA! appeared first on The Source.