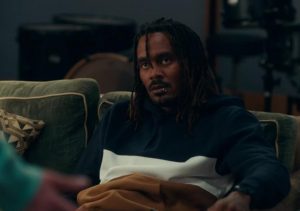 There’s more to know than meets the eye with GaTa Ganter.

The Dave co-star is a music industry veteran, with an ability to seamlessly transition when necessary. While the hit FX series has made him a rising star, his climb to the big screen did not happen overnight.

GaTa first begin working as a hype man for “Rack City” rapper Tyga. As Tyga’s extra battery pack on stage, he would tour with Gym Class Heroes, which landed him on tour with Lil Wayne as well.

“A lot of people don’t know I got songs with Lil Wayne and I did them at the height of his career,” says Gata. “I really appreciated that because he is one of my favorite rappers.

One of those tracks are the Tyga-assisted, “Stacks on deck.”

While Gata admits the well went dry after his run with Weezy and Tyga, he continued to remain motivated. He received a call from Tyga’s former manager, who began working with Lil Dicky. GaTa quickly jumped at the opportunity to become Lil Dicky’s hype man and one of his closest friends.

The relationship would catapult to the on-screen script you see on FX’s Dave. GaTa even had to audition to play the role as himself. While he first balked at the idea of auditioning, it helped him understand the business and plateau they prepared to embark on.

“Lil Dicky helped me to understand, like, ‘this is big,” GaTa stays. “‘There are people that have been acting for almost 20 years that may play you better than you.’”

Although it was a humbling experience, GaTa embraced the challenge.

“No one can play me better than me,” he says. “First, you have to be bi-polar. That’s the first thing. Then no one else has the charisma and can think on the fly like I can.”

On Season 1 of Dave, GaTa embraced the role of mental health advocate after revealing his disorder.

While Dave has transformed GaTa into a beloved TV star, he is using it as another foundation to launch his longed rap career. He recently teamed up with Charmin to host its “Crap Battles” series featuring Rico Nasty, Lil Dickey and Lil Yachty.

Now that Season 2 is underway, viewers can expect a continuation of the quirky humor that makes Dave unforgettable. GaTa Ganter plays an instrumental part of making that happen.

The post How ‘Dave’ Star GaTa Landed the Role as Himself on Lil Dicky’s Hit FX Series appeared first on The Source.