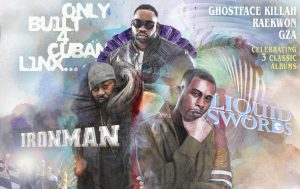 ….and now for a message from Wu-Tang Clan’s GZA.

“Have you ever been stung by a thousand hornets? 500 Killer Bees, buzzin’, and really on it? Whipped with Cuban Linx and cut with Liquid Swords? Choked by Ironmen until we crush your vocal chords?”

The hip-hop legend has announced a tri-headline tour with his WTC brothers in Raekwon and Ghostface Killah. The 3 Chambers Tour will celebrate the legacy of those rappers and three of the best albums in the history of Hip Hop: GZA’s Liquid Swords, Raekwon’s Only Built 4 Cuban Linx, and Ghostface’s Ironman. The 25-city tour kicks off in Minneapolis on October 1st and concludes in Indianapolis on December 18th.

“As we start to approach a back to normal environment, which is overdue, I’m overly excited about seeing my fans again. This 3 Chambers Tour will be something I recommend nobody misses. This shit will be bananas!!!! Get ready to enter the WU again… (#ironliquidlinxshit),” Raekwon said in a statement to fans.

“Yoooo, I’m happy to get out to perform and party HARD with my fans!!!” Ghostface Killah exclaimed. Ghostface will also offer a special meet and greet with fans after the show and will take pictures and give away cans of his new energy drink Hard Cream.

You can see all of the dates below.