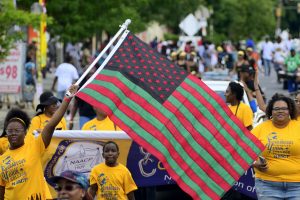 IKEA is apologizing for serving fried chicken on Juneteenth.  A store in Atlanta, Georgia wanted to honor employees last Saturday with a holiday lunch menu.  Along with the chicken, it included watermelon, mac-n-cheese, potato salad, collard greens and candied yams.  This didn’t go over well with workers.  More than 20 of them called out in protest, arguing the food has been used to stereotype Black people.

According to the New York Post, IKEA said the menu was created with the best intentions, but admits they got it wrong.  The furniture retail giant promised to “thoughtfully honor Juneteenth in the future.”

“In addition to offering Juneteenth as one of our paid holidays nationally, our IKEA Atlanta store has recognized Juneteenth with our co-workers for the past four years. To honor the day, a lunch menu was created with the best of intentions, including recommendations from black co-workers,” a spokesperson said. “We value our co-workers’ voices and changed the menu after receiving feedback that the foods that were selected are not reflective of the deeply meaningful traditional foods historically served as part of Juneteenth celebrations. We got it wrong and we sincerely apologize. We are committed to educating ourselves and putting a process in place that will allow us to thoughtfully honor Juneteenth in the future.”

The spokesperson additionally noted that “there were Black co-workers involved in the creation of the menu. Out of respect for their privacy, we cannot go into more detail, and we take this as an important learning and shared responsibility.”