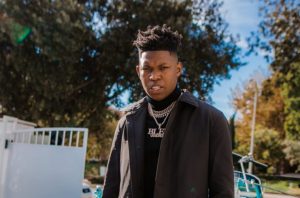 He confidently says so. Yung Bleu a.k.a Bleu Vandross has musically flourished through versatility. When you add Vandross to your name, the pressure certainly heightens.

Prior to Drake-assisted hit single, “You’re Mine Still, he released a series of projects including his Investments and Bleu Vandross series. As his notoriety began to grow, the Mobile, AL artist received an alley-hoop from fellow Mobile native and NBA All-Star, Demarcus Cousins. Cousins encouraged both Drake and Bleu to collab on a track and the rest is history.

Now he is coming for the R&B crown. He recently hopped on Triller to express his feeling towards the current state of R&B.

Yung Bleu then received an endorsement from Grammy-nominated, R&B veteran, Tank, when The Neighborhood Talk reposted his Triller video.

“You gotta let this generation sing their r&b the way they feel it,” says Tank under The Neighborhood Talk post. “The rhythm always changes and the blues is personal so no one can tell you how to create your art. ‘Real’ is what’s true to you. That kid @bleuvandross is dope and he has the support of a person who’s been doing it successfully for over 20 years! R&B MONEY!”

A fan took to the comments as well saying, “this is not ‘real’ R&B, while others embraced the talent of Yung Bleu similar to Tank.

While there continue to be many comparisons of “classic” and current R&B, the true beauty lies within the moment of the art. Let it live before the comparison are brought to the forefront. Until then savor it.

The post Is Yung Bleu Saving R&B? appeared first on The Source.