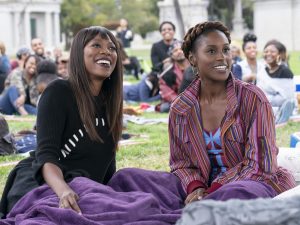 With the final season of hit HBO dramedy ‘Insecure’ upon us, fans of the series are praying this season will not the last in the universe created by Issa Rae.

In an exclusive interview with Entertainment Tonight, Rae spoke of her challenges during the pandemic. “It’s a struggle. It was and still is a struggle. I feel so thankful that we’re able to work and we’re actually able to shoot this season because we had a lot of false starts. We were supposed to be shooting way back in September and that just didn’t happen. And obviously in L.A. as you know, we’ve been the epicenter and so even just coming out of that was a challenge.”

“But when people ask if shooting the season is bittersweet, I say it’s mostly sweet and the only bitter part is the fact that COVID is in place because it just doesn’t allow us to fully immerse ourselves in the experience and each other and you know, properly saying goodbye,” she continued. “And it sucks to go out like that during this, but things feel a little more optimistic. You know, I’m almost fully vaccinated, I’m hyped!”

Rae expressed a bit of disappointment in not being able to fully dive into the show due to the restraints of the pandemic but admitted that she was definitely “satisfied” with how the fifth and final season played out. “I’m currently satisfied so I hope that other people will be,” she added. “We will not be able to please everybody, but I’m happy.” But on the series future and the prospect of a spinoff, Rae gave a glimmer of hope stating, “there’s a chance for everything.”

There’s no official premiere date for Insecure’s final season but fans should expect it to hit HBO later this year.

The post Issa Rae Dishes On Possibility of ‘Insecure’ Spinoff appeared first on The Source.