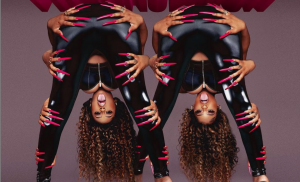 The City Girls announced that it’s officially time for the Twerkulator!

After garnering almost 25 million hashtags, the unreleased viral record by the Miami duo was finally cleared.

“t’s time for the twerkulator

The reason why this is a big deal for all city girls worldwide is because Yung Miami previously said the sample wasn’t cleared and that’s the reason that the song wasn’t officially released.

But thanks to a determined group of City girls and boys, “we can shake ass this summer!!!!!” as JT stated.

City Girls teased the release of Twerkulator on Monday afternoon, and the behind-the-scenes video of the photoshoot stirred up some controversy with the Clermont Twins.

The twin sisters called on the City Girls for “copying” their pose and not crediting them.

“It’s the moodboard for meeee,” Shannon Clermont tweeted, before tweeting, “They hate…then they copy.”

In a separate tweet she claimed, “I love Caresha,” but Yung Miami nipped that in the bud.

“It wasn’t on our mood board but I DID tell JT let’s try the post I thought it was cute! What’s the problem?” The rapper added, “Nobody discrediting y’all I’m not with the shady sh*t let’s not go there!”

Shannon wanted some smoke and responded, “Its love over here too but Lol let’s not go there? Cause what?” But Miami stood her ground, “ou let me know I addressed the room it’s whatever. I’m Mad cause I like them fr!”

“These magazines & brands not! Y’all be scared to see other women grow & learn. It’s enough clothes for everybody! Talking about fake fashion b*tch you no Naomi [Campbell] I see your ass on holiday flyers like everybody else! So lazy of you to be tired about a POSE!!!!”

The post It’s That Season: City Girls Are Set To Release ‘Twerkulator’ In Time For The Summer appeared first on The Source.