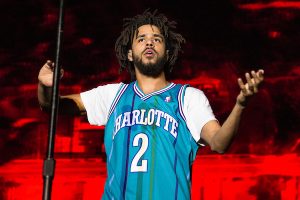 J.Cole is back in the gym.

Although the Dreamville rapper’s dream of playing professional basketball got cut short, he is still a student of the game.

A few months ago, Cole went to Africa and played in the BAL, Basketball Africa League, with the Rwanda Patriots, however, he did not perform as he expected. During Cole’s stint with the Patriots, he went 2-1 while tallying five points, three assists, and five rebounds in 45 minutes off the bench.

The former St.John walk-on obviously wants to perform better if given the opportunity again. That’s why he’s back intensively working on his game.

Cole recently met up with Lakers assistant coach Phil Handy and Laker guard Talen Horton-Tucker, to help him elevate every part of his game. Cole’s efforts to get better really impressed coach Handy. In a tweet, the Laker coach said,

“The #passion is real, the #work is real, the love for the #game is real and @JColeNC is a real student of the game. Pulled up for a couple of days and got some work in with @Thortontucker … got out of his comfort zone and got better. @createwhatstrue @sportsxacademy”

Even though J. Cole only played in three games in the BAL, he successfully fulfilled his contract. After leaving the country on a family emergency, who knows if he wants to give it a shot again. We do know he’ll be better prepared for this go-round if J.Cole goes back to professional basketball.

The post J.Cole Back Working On His Game Despite Pro Basketball Career Over appeared first on The Source.