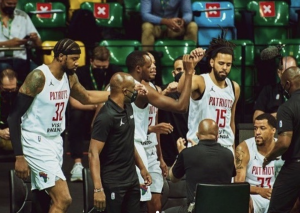 “So many thank you’s are due. Thank you to @thebal and to @patriotsbbc for the opportunity. Thank you to my teamates, the coaches and staff for treating me like family. I learned so much in the few weeks we were together. Congrats on that win tonight and good luck next game.” he continued “Thank you to @puma for supporting a dream from day 1, and getting me to Rwanda and back safely via Puma jet. Thank you to the entire country of Rwanda and to the city of Kigali for hosting us. BEAUTIFUL land with BEAUTIFUL people. To anyone considering visiting or moving to the continent, from everything I saw and heard, I would recommend you consider Kigali and Rwanda in general. Thank you to everybody that had kind words for me despite my inexperience. I plan to get better.” said Cole.

According to ESPN, the rapper had 5 points, 3 assists and 5 rebounds in 45 minutes of three preliminary games. The expectation was that the Grammy Award-winning rapper would play in three to six games. The Patriots BBC play Mozambique’s Ferroviario de Maputo in the playoff quarterfinals on Thursday.

The post J Cole Completes His Contractual Obligation To The Basketball Africa League appeared first on The Source.