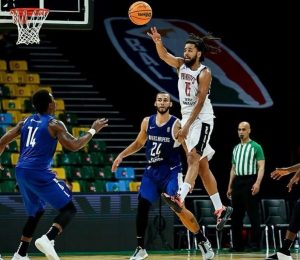 J. Cole played his first professional basketball game on Sunday, May 16. The Grammy Award-winning artist recently signed a contract to playing in a African Basketball league, where he will play 3-6 games with the Rawanda Patriots B.B.C.

Following the release of his sixth studio album, The Off-Season, Cole goes from spitting bars in the booth to shooting jump shots on the hardwood. As far as his debut, the 36-year-old rapper finished with 3 points, 3 rebounds, and 2 assists in 17 minutes of play. He scored his first bucket on a tip-in layup from a fast break. Most importantly, his team got the win 83-60.

Prior to Sunday’s debut, it was reported that Cole had signed with the African ball club. Following his first game, it is official. At 36 years old Cole is exemplifying the sentiment that anything is possible with hard work, dedication, and preparation. The Dreamville founder received love and support from a number of his peers including Drake, who posted J. Cole on his IG story.

Prior to his rap career, Cole was a standout high school basketball player and briefly played as a walk-on while attending St. Johns University. After more than a decade, it is quite apparent that his passion for basketball is still alive and well.