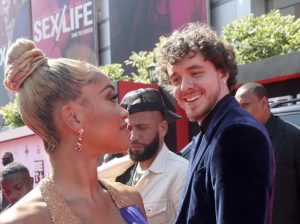 We all saw Jack Harlow ready to risk it all. The “What’s Poppin” rapper was caught staring down the stunning Saweetie on the BET Awards red carpet.

After a couple of days of jokes online, Harlow says the moments caught on camera between the two is just “a friend vibe.”

A video on The Shade Room caught Harlow pulling up on Saweetie, in an attempt to what people think he shot his shot. You can see the moment below. Do you think Harlow wanted to slide in and get close to her.

The post Jack Harlow Says Red Carpet Moment with Saweetie is a “Friend Vibe” appeared first on The Source.