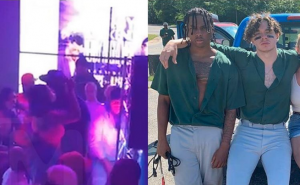 According to Louisville’s WDRB, DJ Ronnie Luciano, the DJ for Generation Now’s Jack Harlow, has been indicted on murder and tampering with physical evidence in the death of a 37-year-old woman in a Louisville nightclub.

Kasmira Nash was killed by a single gunshot wound while working as a bartender at Vibes Restaurant and Ultra Lounge in Louisville, where a fight between a man and woman turned deadly. Nash’s family blames the club’s security for letting Luciano back into the club after a previous altercation, but doesn’t place any of the blame on Harlow.

“They knew there had been an altercation prior to this with this same DJ, so he was not supposed to be allowed back in the club,” said Nash’s mother, Kathy Davis. “I felt like he should have been removed or they should have taken my daughter and told her to go home.” Davis went on to say, “I do not accuse [Jack Harlow] or feel like it was entirely on him, because he’s an entertainer. He was there to do a job, but I feel like the security and the owner of the club should have been more diligent in protecting and making sure it was secure.

DJ Ronnie Luciano, whose real name is Ronnie Tyshon O’Bannon, currently has a warrant out for his arrest with bail set at $500,000. He’s expected to have his firt arraignment hearing on May 17.