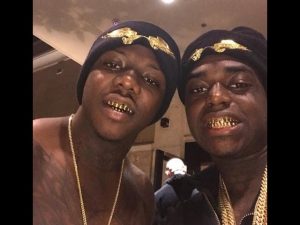 Aside from a rapper’s luxurious lifestyle, fans live to see the rap beef unfold between artists. Almost like a guilty pleasure, so much so that some fans instigate beef between artists, and if the artists entertain the nonsense, they will find themselves in a rap beef.

Jackboy has proved that he is not the one for instigation. Yesterday, June 29th, Kodak Black allegedly had a falling out with his artist, sparking rumors that there could have been some beef. The rapper seemingly confirmed those rumors after stating that he would no longer be signing a new artist to his label.  “These n*ggas ungrateful,” the rapper tweeted.

Fans were looking for a clap back from the “Won’t Understand” rapper on his Instagram live stream where he stated that he won’t be addressing private issues to the public.

“I ain’t answering sh*t,” he stated in the live. “I ain’t got sh*t bad to say about people. You ain’t gon’ get that from me… You ain’t gon’ have no video of me on YouTube.”

“Nah, that’s my brother at the end of the day,” Jackboy added. “Hey, see your number, unblock me off Instagram, see your number, and I can holla at you. All that other sh*t… Everybody know like, as far as Day Ones, Jackboy a real ass n*gga. So, I’m not gonna go in detail or explain sh*t to nobody. I don’t care. I do not care about Instagram that much.”

The rapper then began to explain the bigger picture and why he feels like he “won.” “I never wanted to be a rapper in my life. I started rapping probably like, three years ago, four years ago” he continued. “This sh*t don’t mean that much to me. I made millions off this sh*t. I already won. I bought my mom a house. I won. I bought my mom a car, paid off, I won. All my cars, I got three cars, paid off. I won. Like, I’m not finna come on here and talk bad about my brother.”

Could Jackboy be one of the mature rappers? The rapper concluded the explanation by saying that he will settle his differences with Kodak Black in a one-on-one conversation rather than going back and forth on social media. Could this inspire other rappers to cut their Twitter fingers? Stay tuned.

Check out the clip of Jackboy’s live below.

The post Jackboy Won’t Participate in Any Kodak Black Slander appeared first on The Source.