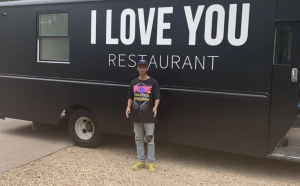 This isn’t he 22-year-old activist’s first time giving back. Since 2019, he has been helping feed communities with his I Love You food truck in the Los Angeles Skid Row area. Now he’s helping out in a bigger way. In an interview with Variety, Jaden explained that anyone can order from the eatery but if a customer is not homeless they’ll have to pay ‘more than the food’s worth so that you can pay for the person behind you. According to the actor, ‘It’s for homeless people to get free food.’

History of Giving Back

Two Years ago, Smith and his company JUST Water put in a water filtration system in Flint, Michigan.

The 22-year-old also is head of 501CTHREE.org’s Water Box project. Their goal is to provide access to clean water to communities.

His website details the locations of four Water Boxes in Flint, where the main water system was contaminated with lead.

In addition to this, Jaden has put a Water Box in New Jersey and New York.

The post Jaden Smith Is Opening A Vegan Restaurant For People Experiencing Homelessness appeared first on The Source.