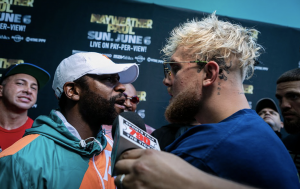 After a heated confrontation after a press conference turned violent, Jake Paul is now banned from the Hard Rock Stadium on June 6 when his brother Logan Paul will face off against his new enemy Floyd Mayweather.

The fight sparked after an argument between Paul and Mayweather, which led to the former grabbing the cap of the undefeated boxer. A big scuffle ensued leading to some bumps and bruises on Paul.

In a video posted on Logan’s Instagram, he breaks the news to his brother: “They’re not letting you into the fight. You’re literally banned from the Hard Rock Stadium on June 6.”

The post Jake Paul Banned From His Brother’s Fight with Floyd Mayweather on June 6 appeared first on The Source.