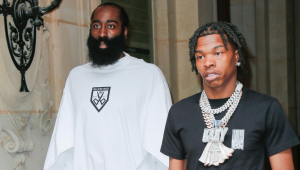 According to a report from TMZ, NBA star James Harden was detained by Parisian police while Hip Hop star Lil Baby was arrested for marijuana possession in Paris following a traffic stop.

The report states that the police smelled the marijuana after they pulled over the car occupying the men. Harden was only questioned and detained while Lil baby was detained and seen in a police vehicle speaking with police in a now viral video of his arrest.

Lil Baby was arrested along with two others after Parisian police found 20 grams of marijuana.

Harden and Baby were both spotted alongside Kanye West at Paris Fashion Week before the arrest.