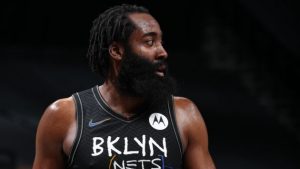 The Brooklyn Nets are the must-see team in the NBA. On Monday (March 29) Lil Baby and 42 Dugg sat courtside to catch James Harden and the gang in action against the Minnesota Timberwolves.

The Honeybun tandem of Baby and Harden greeted each other after the Nets won and Harden put another triple-double in the campaign to receive his second MVP.

It was a full-on Hip-Hop celebration as Lil Kim was the halftime performance. You can catch the moments below.