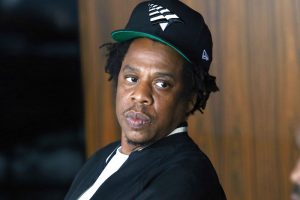 TMZ reports Hov alleges Mannion has placed his name and likeness across the website and sells images of Jay for thousands of dollars. Hov asked Mannion to quit the practice and Mannion asked for tens of millions of dollars to stop. Jay says Mannion is making an “arrogant assumption that because he took those photographs, he can do with them as he pleases.”

Mannion was hired in 1996 to shoot the cover of the Reasonable Doubt album but took hundreds of pictures. Mannion was paid “handsomely” for the images used by Roc-A-Fella Records.

In response, a rep for Mannion reached out to TMZ.

“Mr. Mannion has created iconic images of Mr. Carter over the years, and is proud that these images have helped to define the artist that Jay-Z is today,” the rep said. “Mr. Mannion has the utmost respect for Mr. Carter and his body of work, and expects that Mr. Carter would similarly respect the rights of artists and creators who have helped him achieve the heights to which he has ascended.

“We are confident that the First Amendment protects Mr. Mannion’s right to sell fine art prints of his copyrighted works, and will review the complaint and respond in due course.”

The post JAY-Z Sues ‘Reasonable Doubt’ Photographer for Using Hov’s Image and Likeness Without Consent appeared first on The Source.