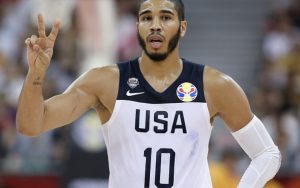 The Olympic games in Tokyo are upon us. With last year’s games being cancelled due to the coronavirus pandemic, the world’s greatest athletes come together once again to compete for the gold.

Since NBA players were allowed in the Olympic games with 1992’s Dream Team, USA Basketball has dominated the Olympics. Both NBA and WNBA players bring home the gold.

This year’s NBA roster includes Kevin Durant, Bradley Beal, Devin Booker, Damian Lillard, Jayson Tatum and more. Tatum has blossomed into one of NBA’s most prolific young stars with the Boston Celtics. He was 15 when he made his first US basketball team. Tatum attributes his early development to his work ethic. Following his rookie season, the 2x all-star receive mentorship from his favorite player, Kobe Bryant. Now he gets to represent Bryant by wearing his Olympic Jersey No. 10.

“With this being the first Olympics since we lost him, it holds that much more value,” said Tatum. “It’s not something I take lightly.

The NBA Hall of Famed died in a helicopter crash with his daughter, Gianna, and seven other people back in January 2020. Since his passing, the world continues to honor the life and legacy of the Lakers legend.

For Tatum, he has donned No. 10 since his first USA Basketball experience at 15. Now in his first Olympic games in Tokyo, he gets to represent his favorite player.

USA Basketball exhibition games begin this Saturday, July 10, before the team heads to Tokyo for the first game to Gold on July 25.